Magic City of the Plains

The reason behind the nickname for Cheyenne, Wyoming, has to do with its origin. Before mid-1865, no permanent structures existed in the valley to the east of the Laramie Mountains. But US Major Grenville Dodge had the task of locating and surveying the best route over the mountains for the Union Pacific portion of the transcontinental railroad, and he established a tent camp for him and his workers. His misspelling and mispronunciation of the native tribe’s word “shai-en-na” into a two-syllable word gained popularity by usage.

Dodge suggested the town site at a Fourth of July party. Once the route was accepted, a terminal town was established from which to base the railroad’s construction. In fall 1867, construction of Fort D. A. Russell was built where a cavalry encampment had existed to protect the construction workers from the local tribes who (rightly so) resisted the invasion of their lands. As happened in all railroad boom towns, real estate speculators arrived first in hopes of snapping up land they would turn around and sell to the arriving gamblers, tradesmen, merchants, and saloon owners who followed the railroad. In August, 1867, the town charter was accepted by the Dakota Territorial Legislature (this happened before Wyoming became a territory), and the population soared to 4,000 inhabitants by the end of the year. Three hundred businesses operated. A school opened to handle more than 100 students. Churches of several denominations were built. As if the city appeared by magic from the plains. 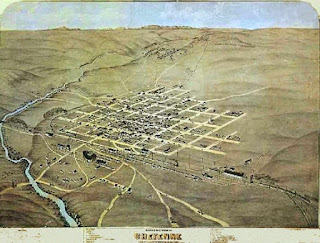 As for the railroad construction, the workers were laying an average of 6 to 7 miles of track a day. (One day’s record was 8 miles.) The track reached Cheyenne on November 13th, and the first train arrived the following day. Then the workers moved on toward Sherman Pass—come and gone n the blink of an eye. Much of the lawless element moved with the railroad crews. But as with many railroad towns, not everyone picked up stakes and moved to the next terminus town. Many liked the organization of the town and the location well enough to put down roots, but the population dropped to 1,450 in 1870. Once the transcontinental railroad was in operation, the town was established and ready to provide services to travelers.

Cattle raising on outlying ranches provided the town with business. Then in mid-1875, the Black Hills gold fields were opened, and miners and prospectors came to Cheyenne for supplies. A stagecoach line was established to relay passengers and supplies to the gold mines. Electric lights were built in 1882 at a time when Cheyenne was the wealthiest city per capita in the world. By 1890, the population grew to over 11,000. 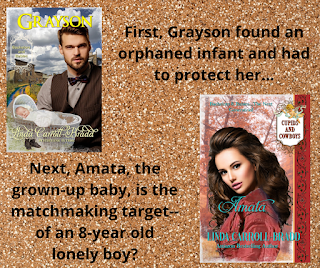 My upcoming story, Amata, Cupids & Cowboys book 5, is set in 1892 Cheyenne. My previous book in the connecting series, Grayson, Bachelors and Babies book 8, is set in 1871.

BLURB: Rancher Harlan Thorpe has his hands full and needs no more distractions. He’s establishing a breeding program on his ranch, keeping an eye on his stubborn son who keeps ditching school, and riding herd on his younger brother who would rather drink and gamble than put in an honest day’s work. What he doesn’t need is a nosy woman telling him how she can help his son with his learning disability--even if she’s the first woman to spark an interest in years.

Two mischievous young boys contrive situations to get Dario’s sister and Liam’s dad together. Each time, the adults don’t know what has hit them, but the growing feelings are definitely not in either one’s plans.

Posted by Linda Carroll-Bradd at 2:30 AM