To See or Not To See

TO SEE OR NOT TO SEE
by Teresa Ives Lilly www.teresalilly.wordpress.com

I remember the day my eye doctor informed me it was time for me to get glasses. I was about forty and not very happy about it. However, once I put them on, and got used to them, it opened up a world I was missing. I was able to see the words in books and on the computer again, without straining my eyes and giving me a head ache.

However, picking out frames was and continues to be a problem.  No matter what the style, I don’t really like any glass frames on me. With Astigmatism contacts are not a good choice for me, so I’ve made my choices in frames. Each pair of glasses lasts about two years and then I have my eyesight re-evaluated and new frames chosen. 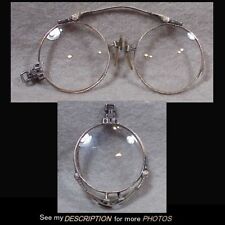 But really, who am I to complain. Think of all the years in history where glasses were not readily available to the general public and especially to women.   It was really only in the 19th century when a variety of glasses came into fashion for women. The frames were metal and the lens shaped into circles or ovals some like the Pinch-nez styles, without temples were worn and these sometimes had a long ribbon or chain on them so they could be hung around a lady’s neck 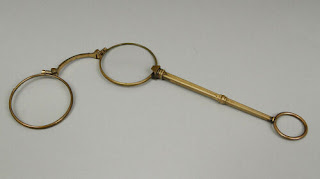 These oval frames came into vogue after the popular lorgnettes, which were eyeglasses attached to a handle or stick. These were commonly used for reading among upper-class women.  However, its doubtful that a wealthy family would have allowed their daughters to be seen in public with any form of glasses. 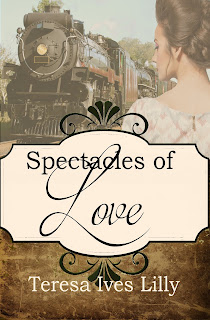 In my book, Spectacles of Love,
the concern a woman has over wearing spectacles almost ruins her chances at love.
Charlene Trumbel is a wealthy, 29-year-old, spinster daughter of a wealthy New York family. However, she is appalled at the wasteful lifestyle her family lives. When given a chance to ride on the Orphan Train to get firsthand experience to write an article to induce wealthy families to support the Orphan Train, Charlene jumps at it. However, her poor eyesight, which has caused her to remain a lonely wallflower her whole life, almost stops her from the trip. That is until she meets a young city boy who agrees to come along with her and be her eyes. Along the way, Charlene learns the ins and outs, ups and downs of what it means for the children to be sent west on the orphan train.

Bronson Jacobs, owner of a Kansas brick company is on his way home when he first meets Charlene on the train. He is instantly attracted to her and interested in the concept of the Orphan Train, but he can’t understand why she doesn’t get some spectacles to help her see better. Bronson offers to tag along and watch the proceedings as the children on the Orphan Train are placed with families in several Kansas towns.

When Bronson takes it into his own hands to force Charlene to get a pair of spectacles, will she see his act as one of love?

She may have found a pair of glasses in a case like this in a general store. 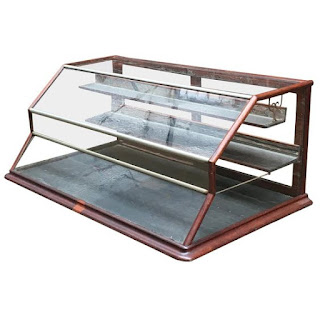 Posted by Teresa Ives Lilly at 1:00 AM