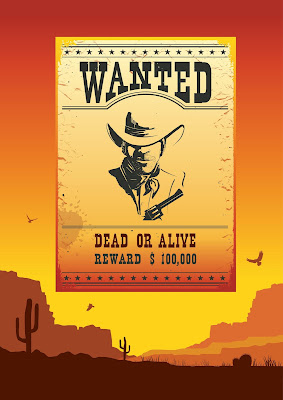 Wanted: Dead or Alive
The words that thrilled western books, TV shows, and movies. With our lawless and wild west, the need for those who would chase down the wicked outlaws out paced the number of sheriffs and marshals available.

In England in the 13th century, bail was a person not an amount of money. An individual was designated keeper of the person accused of the crime. IF the accused skipped out, the custodian took their place, even on the gallows. You can see why they would hire someone to catch the criminal.

This all changed in 1679 England with the Habeas Corpus Act and the bail became monetary. The right was later written into the US Constitution.

In the US, in 1873, bounty hunters were given great freedom in the apprehension of criminals and bail jumpers because of the Taylor versus Taintor decision.

Bounty hunters could go anywhere and apprehend bail jumpers in much greater freedom than the lawmen.
Some lawmen did supplement their pay with bounties, but they were subject to the law. Although some may have played loose with the rules in the wilder towns and territories.

One of the most famous bounty hunters who infiltrated the Butch Cassidy gang was Charlie Siringo. He later joined the Pinkerton Detective Agency.

Today, we still have bounty hunters going after bail jumpers.
~~~~
I just started a series of books featuring a bounty hunter, Rand Ketcham. He is an ex-bounty hunter, reluctant matchmaker, and rose gardener.  His first book is out. Lawfully Saved and the next should be out in August.  Quest for Iris.