Sorting Through the Family Past

In May our family lost its matriarch. My mother-in-law, Virginia, was a lovely woman who will be greatly missed. She was 96 and had lived a fulfilling life. Her mind was still sharp, though her body was giving out on her. On the Wednesday before she went into the hospital on Sunday, she went to bridge club and got the high score. It was a fitting way for her to end her card playing career.

We've spent the last nine days going through her house dividing up her things. She'd lived there for 42 years and had accumulated items from her parents, in-laws, as well as sisters and my father-in-law's siblings. Needless to say there was a lot, much of it was pre-1960 going back in some cases 100 years as her father was born in 1865.

So, why am I telling you this? I thought you might be interested in some of the things which came home with my and my husband. 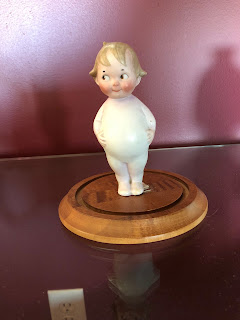 This little Kewpie like doll stands about 6 inches high. She's so cute with her rosy cheeks and buttons marching down the back of her pj's. She has no maker's mark so I haven't a clue as to the brand. I like her anyway. 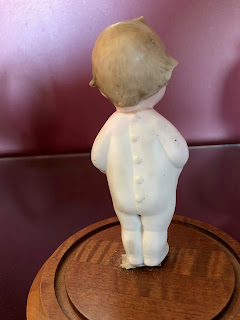 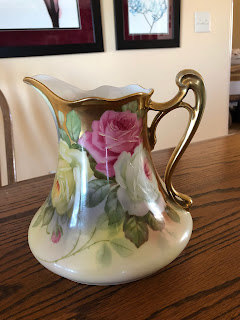 I love this pitcher. It's a Prussian Royal Rudolstadt B. Not valuable I don't think, but it's lovely. Early 1900's 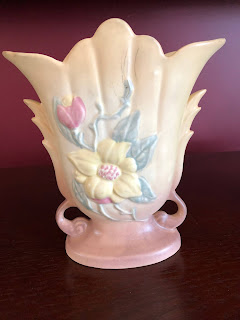 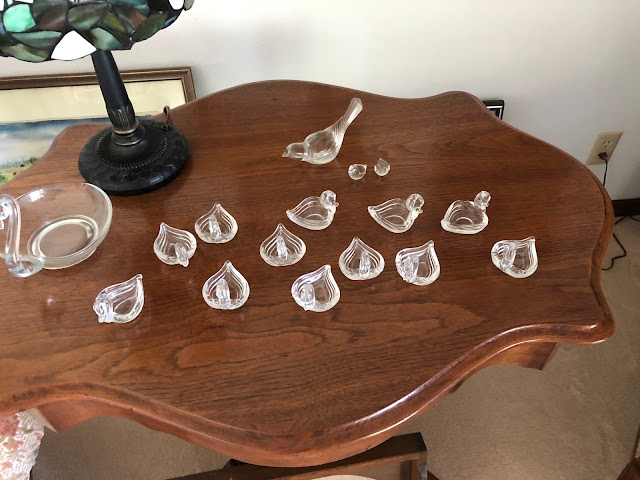 Although I loved theses little guys, after several days of dividing things, I decided to take a photo rather than take these home. They are so cute but what would I do with 12 Heisey crystal swan salt cellars. In case you don't know, salt cellars were the for runners of salt shakers. Each cellar would have salt and a tiny spoon to scoop the salt and spread it over your food. The spoons are gone but the cute little swans are going to a new home that's not mine. 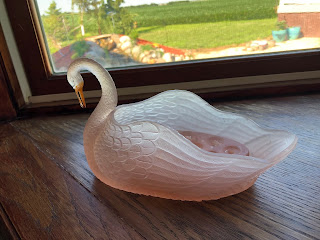 Most likely an L. E. Smith depression glass vase with a flower frog. 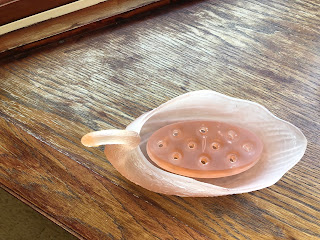 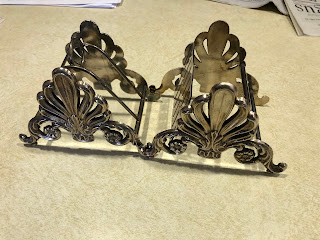 You have to be careful when thinking something is antique. We thought these were Victorian. Turns out my MIL purchased the napkin holder and table knife holder in the time of dot matrix printers. We found another set in the box with the receipt. They are reproductions even though they are somewhat tarnished. Still an interesting bit of Victorian-type tableware.

My favorite of all the pieces I chose is this perfume pendant. The chain is long and I believe would be worn under the bodice. That way the wearer could retire to the Ladies Retiring Room and dab on a little more perfume to keep her beau attracted as the evening went on. There is a tiny stem in the flask which holds a drop or two of perfume. I can still smell the rose perfume it held. 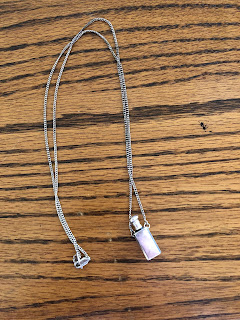 The pendant will figure prominently in an upcoming book.
Posted by Sophie Dawson at 1:30 AM