How to Meet your Future Spouse 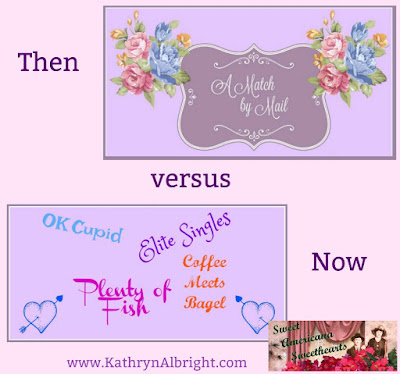 EHarmony... FarmersOnly ...  There is a niche for every type of person out there to find their perfect match through the internet.

In this modern day of internet meet-ups, I have several friends and acquaintances who have met online and then gone on to marry and live their happily-ever after. Often these online dating sights have the new participant answer a list of questions to pinpoint their own character and what type of  person would make a suitable match.

It is this idea of an interview that I used for The Prairie Doctor's Bride.

In the Oak Grove Series, the Betterment Committee has been established to bring women to the town in order to "grow" the town. Doc Graham missed out on the first trainload of five women that arrived in 1879. Now the second arrival of women has him all set to make a match. He needs a wife -- or -- actually a nurse to help in his office.

Doc Graham, although smart in other matters, is quite clueless when it comes to matters of the heart. He has made a list of desirable qualities that he expects in a woman and is in the process of interviewing each new arrival, blind to the fact that he has already met his perfect match in a young woman who lives across the river.

Here is an excerpt of one such interview:  (I had a lot of fun with these interviews!)

Miss Pratt didn’t say a word as they walked past a dog and a few children playing in the school yard. The silence between them grew awkward. He hadn’t expected this. Weren’t most women prone to talking?

“Please. I urge you to speak freely. The one month that the Betterment Committee allows you to decide on a husband and a man to decide on a bride makes it crucial that we find out if we are compatible. That cannot happen unless we talk.”

She came to a swift stop and pressed her lips together in a thin line. “That is a blunt way to put this highly uncomfortable situation.”

He hadn’t thought so. He’d simply been honest. “I tend to be direct.”

He took the moment to assess her appearance. Green eyes, just like his, his height, and a long, slightly curved nose. Egads! She could be his sister!

“Now what?” she asked, stiffening. “You look as though you swallowed your tobacco.”

“I’m glad to hear that. I find the habit disgusting. Then what did that look mean?”

“Oh, that.” She raised her chin. “I noticed them immediately.”

“—their looks would be a foregone conclusion.” It was an interesting possibility.

She frowned. “Perhaps as you suggest, it is best to be frank and let you know my thoughts on the matter of propagating. Your education may even allow you to comprehend what I am about to say better than the other men I have encountered here.”

He wasn’t sure what to make of that.

“I want to marry. Truly I do. I have no close family. I want a companion with whom to share my life.” She took a deep breath and blew it out as if to steady herself. “However, I am not interested in the part of a marriage that happens behind the bedroom door.”

If he had been walking, he would have stumbled.

He swallowed—an attempt to absorb her statement politely and give himself time to gather his thoughts. “I have never heard a woman speak so plainly about such things.”

“I will remind you that you asked me to speak freely.”

He huffed out a breath. Could it be that he’d come across a woman who not only looked like him but who spoke and acted like him? “Perhaps I shall choose my words more carefully.”

She bestowed a slight smile.

“Are you ready to continue with our stroll? We’ve only walked through half the town.”

“As long as we understand each other.”

They continued on their way.

It was disconcerting that Miss Pratt could be as blunt as he. Would such a trait be smart to have as a nurse?

“You’ve said the same thing to other bachelors?” he asked. He didn’t want the entire town to be aware of any arrangements they might have that were of a private nature.

“No. The men I have met have all been much more forward than you. Each one found a way to take my arm or assist me in some way that required touching. When they did that I immediately checked them off my list. I’ve spoken to no one else about marriage except you.”

She kept a list? Another disconcerting thought. Their similarities were growing. “That is encouraging. But—am I so unlike them?” He wasn’t sure he wanted to be all that different from the others.

She arched her thin brow. “As I said—you are most direct. The others were still mentioning the weather while your conversation has already jumped beyond that to marriage. You are a gentleman. Your Eastern breeding is apparent in the way you speak and carry yourself. I would hope that means you keep this conversation we are having just between us.”

She hadn’t answered his question. Mayor Melbourne was a gentleman too, as well as Sheriff Baniff. And he could name several others who deserved that title. All were very different from each other, but he thought of them all as gentlemen.

“While we are on the subject, are there any other expectations you have of marriage?”

She shook her head. “No. I do find it interesting that you haven’t taken me back to the hotel.
You must still be considering me as a possibility, which is a pleasant surprise in light of what I just said.”

More likely, it was because he was still in shock. He’d taken it as a bygone conclusion that if he married, he would have children. He wanted several. That was one of the benefits of wedded bliss. That, and the fact that he had vowed to be a better father than his own.

The distance from the boardwalk down to the road in front of Miller’s Cabinetry Shop was particularly high. Considering what she had just said, he refrained from taking her elbow to assist her. He did offer his arm, but she didn’t take it. He nodded toward the livery and began walking in that direction.

“I had expected children at some point,” he admitted. “I will have to give your condition some consideration. I also desire a companion in marriage, but equal to that, or perhaps more so, I desire a nurse in my work.” He glanced sideways at her. His announcement hadn’t shaken her nearly as much as hers had him.

“I would like someone who will work beside me and help me run my office. This would entail having fresh bandages cut up, washed and rolled at all times. Watching over the patients that are in my office if I am called away on an emergency. Helping to make up medication, salves and tonics. All this would be in addition to cooking and cleaning and the general duties that wives do for their husbands.”

She drew her brows together. “And what would you be doing while I did all this?”

He thought that was obvious. “Seeing to my patients.”

“And in your free time?”

“I’ll use my free time to keep abreast of the changes in the medical field. Reading, writing articles and taking an annual trip to Denver to meet with my colleagues.”

“During which time, I would be required to remain here and keep the office in a state of tidiness?”

“I haven’t thought that far into it, but that is the general idea. I suppose some years my wife might accompany me to see the sights of the city.”

They walked silently past the livery to the railroad station where she stopped once more.

“You have given me a lot to think about.”

“As have you.” More than you know!

“I have no doubt that I could perform the duties you have mentioned.”

“In return, you would have a roof over your head and a respected standing in the community and a lifelong companion.” But he’d never considered that there wouldn’t be touching, caressing, or even a kiss now and then. His first words to her about what their children would look like sounded foolish now. Yet, perhaps, if he was honest with himself, it made sense. He certainly didn’t know how to be a father. His had never been around much. The only hugs he’d received from his mother had been stiff and awkward. He had never seen his parents so much as hold hands. The marriage that Miss Pratt and he had just described to each other sounded a lot like his own parents’ marriage.

The entire thing sounded like a business proposition. His initial excitement at the thought of abiding harmoniously had been squashed with pragmatism.

Well, isn’t that what he had originally intended? Josephine had made it clear he was not suitable marriage material. She'd called him cold. Nose in a book. Cared more for his patients than he did for her. He had hoped to move beyond that defining moment when she’d called off the courtship. He’d hoped for more warmth in a lifelong companion.

“I’ll walk you back,” he said, disheartened. “I think we both have a lot to consider.”


I hope you enjoyed this look into "dating" in Oak Grove. Poor Doctor Graham. He has a lot to learn about love, but when he does open his eyes and experience it for the first time, it is  a wondrous thing to behold.

What about you? Would you ever consider meeting a possible future spouse via the internet? 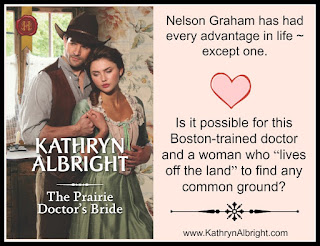