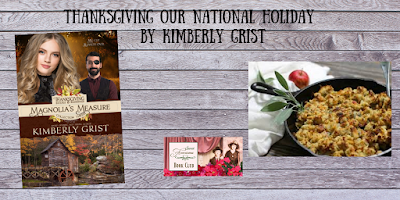 Even though George Washington proclaimed a national day of Thanksgiving in 1789 to recognize the success and conclusion of the War of Independence, for the most part, the recognition of an official holiday was a state or local affair. Typically the governors would select a date in late November or December. 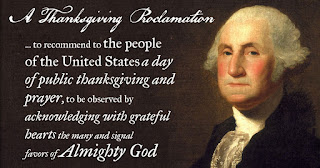 The first Thanksgiving included venison and fowl, such as geese, ducks, and possibly turkeys. Cranberries and currants would have grown wild in the area. Walnuts, chestnuts, beechnuts, shellfish, beans, pumpkins, and corn were abundant. Although there is no way to be certain, it is unlikely that the fowl would have been stuffed with anything other than onions or herbs. However, both native Americans and the early colonists were known to use cranberries to flavor their meat. 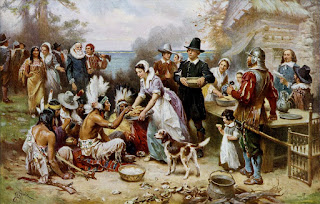 As a result, roast turkey, cranberry sauce, and pumpkin pie became tied to the holiday and part of the New England tradition. Writer and editor Sarah Josepha Hale tried for many years to establish a national Thanksgiving holiday, similar to Independence Day. In 1827, as an editor of Boston's Ladies Magazine, she began writing essays calling for a national holiday.

In 1846 as editor of Godey's Lady Book, she launched a letter-writing campaign to enlist support for her cause. She wrote directly to President Zachary Taylor in 1849, asking him to reinstate a National Day of Thanksgiving. 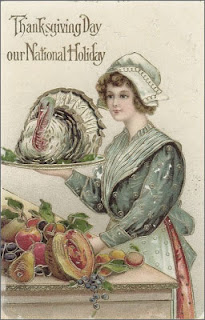 Sarah knew that America was growing fast and believed a national celebration could help bring the country together. In her 1860 editorial, she wrote, "The New National Holiday would awaken in American hearts the love of home and country, of thankfulness to God, and peace between brethren." 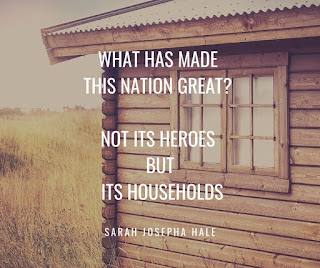 But the idea of a celebration after the harvest was certainly nothing new. The cattle drive ended by the end of November, and farmers would have completed their harvest; both would be a cause of a celebration.

Unsuccessful, she continued her quest and wrote letters to five Presidents. Finally, in 1863, Abraham Lincoln proclaimed a national day of "Thanksgiving and Praise to our beneficent Father who dwelleth in the Heavens," to be celebrated on the last Thursday in November. 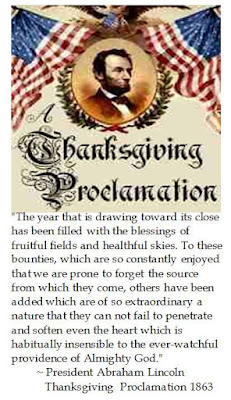 Over the years, Sarah published articles and recipes for roast turkey with sage dressing, mashed potatoes, and pies that to this day are associated with the celebration. By the time Thanksgiving became an official national holiday, her magazine had already inspired women to want to participate. 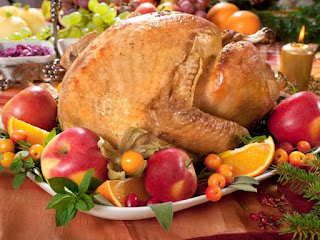 Roasted turkey, stuffed and basted took center stage at the head of the table. In the 1850s, Victorian sensibilities took offense at the word "stuffing" and the term "dressing" became in vouge. 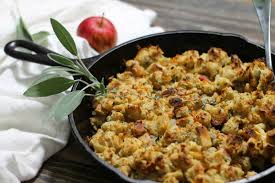 In the America West, cooks developed their own "stuffing" recipes. blending traditions from the North and South while taking advantage of local heritage. For example, cooks in the Pacific Northwest used seafood in stuffing, adding clams and mussels to the traditional oyster.

A Recipe for disaster or love? Magnolia's Measure is available at 99 cents for a limited time. 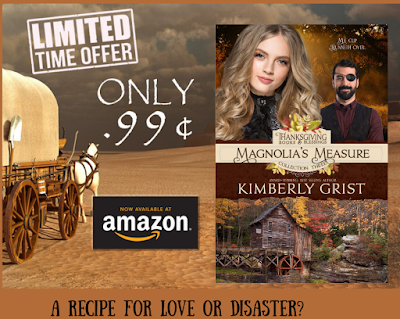 Choosing to participate with a matrimonial agency as a mail-order bride, Magnolia proceeds methodically and uses her skills as a cook to create the perfect recipe for a husband.
https://www.amazon.com/dp/B08DL6NJW6

Posted by Kimberly Grist at 4:52 AM