Love Triangles in the Old West

When you think of the old west, one thinks of cowboys, ranchers, wagon trains, even pioneers. But does anyone ever think of love triangles? One famous triangle involved none other than Wild Bill Hickock who took a shine to Davis Tutt's sister. Bill and Davis had been friends at one time, though they'd gotten into some fistfights and on one such occasion, Davis brought along his sister who Bill took a shine too. Fight averted? You betcha! But then came Susana Moore, who caught Bill's eye and he started sparking with her. She of course discovers he's also sweet on the Tutt woman, and, not one to share, starts flirting up a storm with Davis himself.

My, my! What a triangle! Well, sort of. There were four involved at one point in this. Needless to say, it led to a nasty end involving women and watches. As the story goes, Davis came up to Bill as he was playing poker one day and snatched his pocket watch off the table. He told Bill Hickock he was taking it as payment for what Bill owed him. (Yeah, right. Did he really owe him or did it have to do with the fact Bill had been sparking with two women, one of which was Davis's sister?) 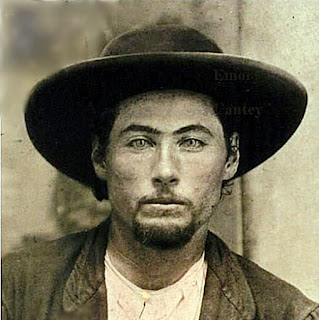 Bill let him take the watch, however, along with his instructions not to wear the watch in public. Naturally the next day Bill saw Davis out wearing the watch! This of course turned into a gunfight on July 21st 1865. It was one of the few recorded instances in the old west of an actual one on one pistol quick draw in a public place. This was the stuff of dime novels folks! And the first story of the shootout was detailed in Harper's Bazaar Magazine in 1867 making Hicock a household name and a folk hero. 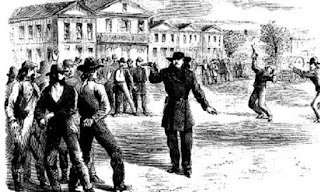 Needless to say, Bill also learned not to try to get sweet on two women at once.