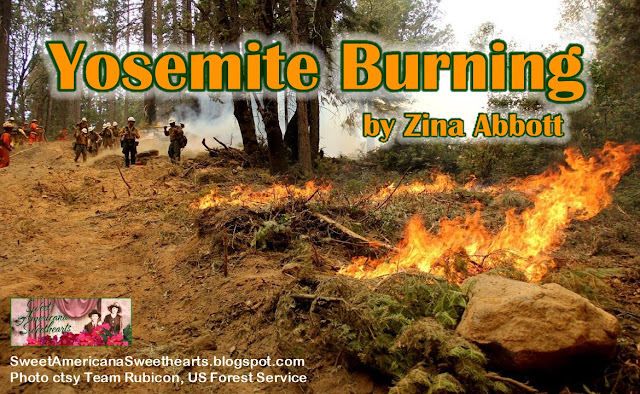 Today marks the one month anniversary of the Ferguson Fire that started July 13, 2018 near El Portal, just west of Yosemite National Park.

There have been 19 firefighter injuries reported. The two fatalities on the fire were HFEO Braden Varney was killed in a dozer rollover accident on July 14, and Brian Hughes, Arrowhead Hotshot Captain who lost his life on July 29 when he was struck by a tree during a firing operation. 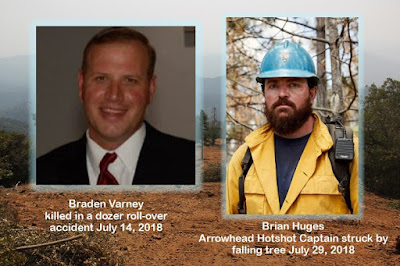 10 structures have been destroyed. With summer daytime temperatures in the triple digits most of the month this fire has been fought, it has been a hot fire fight in more ways than one.

The Ferguson Fire is now the largest fire in the Sierra National Forest's History. This fire is being managed as a full suppression fire. Although it started outside Yosemite National Park, it burned into the park and even threatened Yosemite Valley, one of the main tourist centers of the park. All roads except the one over Tioga Pass were closed for weeks. The park has been closed to visitors,  although it is scheduled to reopen tomorrow even though there will still be firefighters working in the area. Wawona and Mariposa Grove reopened today.
It will probably go down as the second biggest fire in Yosemite history. The largest was the Rim Fire of 2013 that burned 257,314 acres. 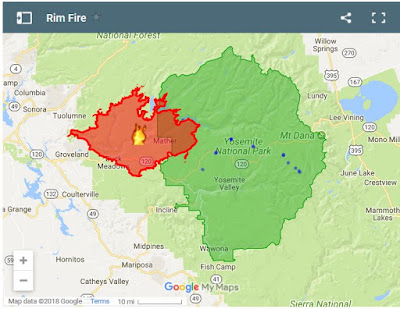 How was fire management started in national parks such as Yosemite National Park?

The 19th century was a period of rapid western expansion for America and the general rule was to transfer the public domain (Federal land) into private ownership. But a growing number of Americans wanted to see the Federal Government withdraw certain tracts of the public domain from private settlement and manage the areas in trust for present and future generations.

Two parallel movements emerged to address the disposition of the public domain. One was the drive to "preserve" the Nation's natural wonders from privatization. The other was to "conserve" the Nation's storehouse of lumber trees. The first could be said to have started in 1864 when the United States Government gifted the Yosemite Grant and Mariposa Grove to the State of California. In 1866, the California State Legislature accepted this land grant with the understanding that the areas were to be managed for the benefit of present and future generations. Although it was a State park, these two grants signaled the beginning of a federal park program.
The advent of a true national park system came with the creation of Yellowstone National Park in 1872 in Wyoming, some 18 years before Yosemite itself became a national park.

The United States Army was assigned the responsibility to patrol and protect Yosemite and Sequoia national parks between 1891 and 1913, and, in that capacity, it helped create a model for park management as we know it today. These army troops were garrisoned at the Presidio of San Francisco during the winter months and served in the Sierra only during the summer months. African-American troops of the 24th Infantry and 9th Cavalry protected both Yosemite and Sequoia national parks in 1899, 1903, and 1904.

The Army's role included the detection and suppression of wildfire within park boundaries. This was no small task considering the size of the sanctuary, the crude equipment at hand, and the few troops that were assigned. Even though the U.S. Cavalry was a far cry from the wildland fire profession of today, they nonetheless represented the beginning of a Federal wildland fire protection program.

Bernhard Fernow, Division of Forestry Chief from 1886 to 1898, endorsed the creation of forest reserves and pointed out the need to transfer control of these lands from the General Land Office to the Department of Agriculture. This would insure that government foresters would have the leverage needed to enforce proper timber management practices. Fernow even drafted an organizational scheme that included the idea that "rangers" would be in charge of the smallest administrative units. Stiff opposition against creating federal reserves was overcome in 1891 when Congress passed the Forest Reserve Act. The President was given the authorization to permanently withdraw from the public domain, forestlands he deemed of national importance.

Fernow's efforts to wrestle control of the Forest Reserves from the Department of Interior fell to his successor, Gifford Pinchot, who is considered the "father" of the Forest Service. He served as Chief Forester from 1898 to 1910. His close friendship with President Theodore Roosevelt undoubtedly played a key role in the latter's executive order, of early 1905, which transferred the growing collection of Forest Reserves from the Interior Department to the Department of Agriculture. Within a few weeks of Roosevelt's order, Pinchot reorganized the Agriculture Department's Bureau of Forestry into the United States Forest Service. In 1907, the Forest Reserves were renamed National Forests.

The U.S. Forest Service became the Nation's primary instrument, for protecting natural resources on Federal land from fire and from timber exploitation. In the teens the National Park Service was established, and charged with protecting the Nation's scenic wonders.


Please give all firefighters battling fires across the North American continent your prayers and well-wishes that they will stay safe as they protect the forests, homes, and lives of our citizens. As you can see from the photo below, the high number of dead trees due to a bark beetle infestation within the last several years has not helped.
Many of my stories, including my Eastern Sierra Brides 1884 series set near Lundy and Bridgeport east of Yosemite National Park, are set in the Sierra Nevada Mountain area on both the east and the west slopes. To see all my published books on Amazon, please CLICK HERE.

Below are photos from the public domain of the brave firefighters of today who have been battling the Ferguson Fire in Yosemite National Park this past month. They are not out of the woods – and we in the San Joaquin Valley are not out of the smoke caused by this fire – yet.