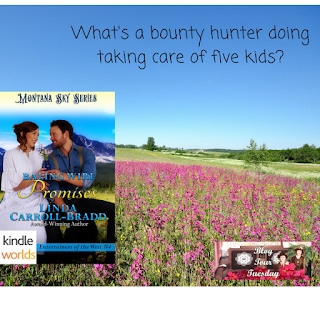 Healer Fantine Pomeroy and five children, aged five to eleven years, are the only survivors of an orphanage fire. She vows to transport them safely to another orphanage, and then she can return to her music studies. But she soon discovers the task may be more than she can handle.


Bounty hunter Pete Andrews is beaten after delivering his last bounty. Unsure if robbery or retaliation is the motive, he sets out to lay low and make a visit to his brother in Morgan’s Crossing. Unable to leave them on their own, he promises to get the woman and children safely to the next town. When he suspects his old life has followed him and threatens the group who has become dear, he vows to protect them. But will that be enough?
Amazon link
Excerpt:


As she got closer to the orphanage, she heard panicked screams from the second floor. The awful cries stayed her feet but only for a moment. Spitting sounds came from the roof as the roaring flames consumed the dry cedar shingles. Fantine ran around the side of the building, looking to see if the sisters had gathered near one of the windows and lowered an escape rope made from tied bedsheets. Nothing. No one.


Biting back a cry, she charged up the front steps and reached for the doorknob but the radiant heat kept her from grabbing it. “Sisters, where are you?” She turned toward the town that lay at least a furlong away. No time remained for her to run in that direction. “Help! Fire! The orphanage is on fire!” Through the front window, she saw the staircase was fully engulfed and sobbed at the devastation she witnessed. The fire must have started on the first floor and climbed.


A form sprawled at the edge of the classroom, a book and candlestick lying nearby. Flames ate at the blonde woman’s clothing.


Oh, Sister Philippa. Fantine pressed a hand over her mouth at the horrifying sight.


On the kitchen side of the house, an upstairs window slammed upward. “Fantine! We’re trapped.”


Trapped? What was the sister saying? Fantine scrambled over the porch railing and jumped into the flower beds before running along the wall. “I’m here.”


Coughing, Sister Catherine leaned over the ledge and tossed down a metal box. “Take the records.” With jerky moves, she wrestled a ribbon from around her neck. “And the key.”


Fantine caught the scratched box and set it on the ground, then reached up and snagged the loop of ribbon. Remembering the flaming staircase, she searched her mind for another escape. No outside stairs had ever been built. A big mistake. Her heart lodged in her throat. “No, you must find a way.”


“We’ve tried. Staircase is gone.” Sister Catherine pressed the crook of her arm to her face.


“I saw, but you could tie the sheets together.” Tears burned her eyes. Everything was happening so fast. She couldn’t think straight. She paced, craning her neck to keep Sister Catherine in sight. Smoke surrounded the sister’s head and crept along the wall toward the roof. “Or dangle the children from the window, so I can catch them.” Fantine stopped and held out her arms like a cradle.


“Smoke is too thick. Many already dead.” She glanced toward the room and pulled the neckline of her nightgown over her mouth. “Go to Virginia City…to Sister Lourdes.”


“No, Sister.” Fantine stood, tears streaming down her cheeks. “Hang from the window ledge and drop. Please, save yourself.”


“Promise…take children…to other orphanage.” She bent over in a fit of coughing.


Don’t give up. “All right, I promise to deliver them to safety.” She stretched her arms high, waiting for the sister to reappear, but her vigil was in vain. Long minutes passed.


Finally, the horrible truth sank in. Fantine dropped to the ground, arms wrapped around her middle, and rocked back and forth. Stunned, she could only whisper, “Can’t be happening, can’t be.” They were all gone. The four caring and devoted sisters who’d run the orphanage, and thirteen sweet, lovable children who would never grow to adulthood. “No, no, no.” Tightness gripped her chest and she could barely breathe. Fantine leaned forward and pounded her fists on the ground. Sorrow threatened to flatten her, and she keened, loud and long. When her throat was raw, she staggered to her feet and grabbed the box. The other children, I must see to them. I promised.
Posted by Linda Carroll-Bradd at 4:32 PM