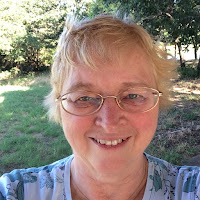 Patricia PacJac Carroll~ I am a writer, Christian first, and blessed beyond my imagination. I live in the Dallas-Ft Worth area of Texas with my wonderful treasure of a husband, my spoiled dog, Jacs, and my awesome son, Josh. Did I say I was blessed? The PacJac is from my initials and my husbands. I wouldn't be able to write if it weren't for him. I love adventure and the open road. The stories of the western era have always been a favorite of mine. I enjoy writing, and my goal is to write stories readers will enjoy.

Constance: Bride of Florida is a Sweet Historical Romance and #27 in the unprecedented 50 book American Mail-Order Bride Series.
Constance has always done everything by the book. Follow the rules, be good, and hide. Can this letter to a man she doesn't know break her out of the shadows?
Drake has dreamed of going to sea, but Father's ultimatum has him sending for a mail-order bride. He'll take care of her, but she needs to know, he'll leave for the sea after they're married,
Greta's Story Book 1,  Maggie's Story Book 2 and Matt's Story  Book 3
If you like the old west, Texas, and Texans, this is the series for you. Three brothers. Two send off for mail-order brides. Ah, but who gets who? Fun, adventure, and of course sweet romance fill these stories where you'll root for each one.

Nettie felt as cold as the ground her father was being laid to rest in. Alone. Always alone. Now, as the spinster sister, she was to live out her life helping her three brothers and their wives. The farm was gone. Sold by her brothers. She had nothing but the ad for a mail order bride.
Sheriff Reed Andrews stared at the paper the judge handed him. Seems the town wanted him to retire. Too old to chase outlaws they'd said. The hollow feeling in his heart told him what he already knew. He needed a wife to share the nights, to wake and see the Texas sun in the mornings, and to love. But could he convince a woman to come to Bluebonnet Texas and marry him?
A sweet Christian romance set in 1867 Texas.

A Bluebonnet Misfit Christmas
Come on in to the town of Bluebonnet, Texas, where romance blooms with a little help from friends. Nettie has matchmaking plans while her husband Reed already has his hands full with a troubled misfit named Yancy.
Sally’s past haunts her with fears of having to go back to the saloon.
Wilbur, Wills, Williams is coming to Bluebonnet to atone for his past.
Amelia and Sheriff Justin Wellesley are in love, but her parents are against their marriage, while Yancy has other plans for Amelia. And Cornie, Cornelia Eustus, is intent on sharing her misery.
Mail Order Brides of Hickory Stick

Beginning with Caroline's Love - Thomas J. Connors sends a letter for a mail order bride for him and his brother. Only doesn't tell his brother. To add to the fun, his letter winds up in newspapers across the east and a trail of brides make their way to Hickory Stick, Colorado.

If you enjoy mail order bride stories - you'll enjoy these.  There are 7 stories so far and #8 is due out in March.

Bounty
Luke Jordan took the envelopes from his mother's hand. Her dying words rang in his head. "Take these to your brothers." His brothers? The Jordan gang of outlaws. Why did he have to waste time tracking them down?
Cat Cahill's morning rides are a pleasant diversion from her mother's lectures on marrying a civilized man from the east. Despite her prayers, Cat hasn't found the man she would want to spend the rest of her life with until she run's into Luke.
Frederick Broyles has plans to takeover the town of Plainview and the surrounding ranches. When he meets Cat, he adds her to his list.
One town trying to avoid a buyout, one gang worth their weight in gold, bounty hunters intent on taking the Jordan gang in more dead than alive = two in love and a bunch in trouble.

Golden Dreams
He's going east.
She's getting nowhere.
Until their dreams collide and a killer, land grant, and tornado throw them together on the California Trail.
Katy Gilbreth escapes the harsh saloon life with nothing but a wounded heart and scarred face. Vowing not to give up, she sets her sights on California where she can get away from the hauntings of the past and start over in a land full of Golden dreams. Katy trusts no man yet needs one to take her west.
Revelation Tarver is traveling east to reconcile with his father and God. Along the way, he has visions of a golden-haired woman with a scar on her cheek. But he has no plans to fall in love again. Then he stops for supplies in a nowhere town and sees Katy, the woman in his dreams.
Because of her past, Rev shuts his heart to Katy. After all, he’s been called by the Lord to preach, and he is headed east. Until a killer, land grant, and a tornado throw them together on the California trail. Katy and Rev embark on a journey where their dreams collide as they face the wild land, a wicked outlaw, and their own fears.

Sometimes you have to go through your past to reach your dreams.

Liberty Belle
Set in 1859 Denver, Liberty Belle is a story of finding freedom and forgiveness. A jilted bride, a wayward sheriff, a small boy, outlaws, and a gallows provide plenty of action, romance, and hope.

Liberty Longstreet was left at the altar, but that wasn’t the worst of her day. She awakens to the fact that she needs to declare independence from her controlling mother. Wanting her freedom and to find a man of her choosing, Libby leaves home for faraway Denver. She just doesn't count on being robbed, falling for a wayward sheriff, or being accused of murder.

Sheriff Wade Calder throws down his badge in a quest for revenge. Instead, he takes responsibility for his enemy’s young son. Wanting only to be free, Wade runs into Libby, and she wins what is left of his heart. Unfortunately, he has nothing to offer her until he picks up his badge. His honor is restored, but it may cost Libby her life.

Together they learn the cost of freedom and the wealth of forgiveness.

I hope you find a book that you will enjoy.
Patricia PacJac Carroll