About A CLEAR HOPE: 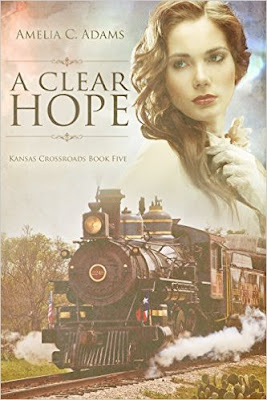 As a daughter, an older sister, and now a hotel waitress, Abigail Peterson is used to taking care of everyone around her. When a nameless stranger collapses on the train platform and is brought to the Brody Hotel to recover, Abigail steps in to nurse her back to health.

Deputy Marshal Gabriel Hanks has seen a lot of violence in his life, and now he works every day to fight it. A man has been murdered, and it’s Gabe’s job to determine the innocent and prosecute the guilty. When that quest puts him at odds with the girl he’s growing to love, he has to choose between justice, mercy, and his heart.

In a world where right sometimes feels wrong and wrong sometimes goes unpunished, can these two come together to create a clear hope?


Deputy Marshal Gabriel Hanks stood on the platform of the station, scanning the passengers as they climbed off the train. He was there to see if a certain wanted outlaw would dare show his face in Topeka, but so far, Gabe had seen no one even the slightest bit suspicious.

One young woman did catch his eye, but not because she matched the description he’d been sent by telegram. She descended from the train slowly, holding on to the railing with both hands, and when her feet touched the platform, she seemed to stagger forward before righting herself. She grasped the corners of her shawl as she moved along. For a moment, Gabe thought she’d be all right, but then she collapsed in a heap. He rushed forward and checked her breathing. It was shallow.
“Let’s get her over to the hotel.” Adam Brody, owner of said hotel, stepped to Gabe’s side. He often stood on the platform when the trains came in to invite the passengers over for a hot meal. “It’s the closest bed, and I’ll send Tom for Dr. Wayment.”
Gabe scooped the young woman up without argument and carried her through the front gate of the hotel. All the waitresses were lined up in a row, prepared to serve the meal, but when Abigail saw Gabe come in, she stepped out of line and hurried over to him.
“What’s the matter?” she asked, touching the girl’s sleeve.
Gabe tried to ignore the way his heart stuttered whenever he saw Abigail. “This young woman collapsed on the platform. Mr. Brody told me to bring her over here.”
She nodded, seeming to understand the situation without needing further explanation. She led the way up the stairs to the second floor and opened the door to a room that was unoccupied. “You can lay her down here,” she instructed. “Has someone sent for the doctor?”
“Mr. Brody said he’d send Tom.”
Abigail nodded again. “I’ll fetch some water.” She took two steps, then paused. “What about you, Deputy? May I offer you a cool drink or a meal? Miss Hampton made apple pie with extra cinnamon this morning. I . . . I’ve noticed how much you like cinnamon.”
“I’m all right, Miss Peterson, but thank you.” Gabe couldn’t help it. He held her gaze a moment longer than he should. She dropped her eyes and moved away, and Gabe was left there to kick himself.
The young woman on the bed hadn’t stirred at all since she collapsed. When Gabe had lifted her, she’d felt like a ragdoll in his arms. Only her breathing assured him that she was still alive.


Amelia C. Adams is a wife, a mother, and a novelist. She spends her days dreaming up stories and her nights writing them down. Her biggest hero is her husband, and you might just see bits and pieces of him as you read her novels. She loves all things historical and enjoys learning about days gone by, but she's glad she was born more recently (she won't say how recently or not recently) because the Internet is awesome, and she's glad she doesn't have to wash her clothes by hand in a galvanized tub.

Purchase Link:  Amazon
Posted by Zina Abbott Author at 1:00 AM